I don't believe in giving up on things.... 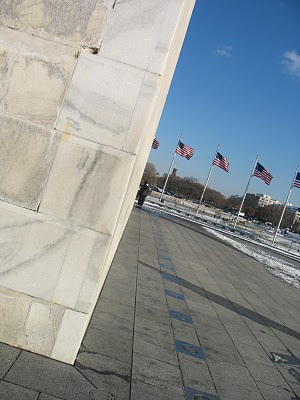 {just a random photo from of the Washington Monument}
Posted by Jenn at 8:00 PM No comments: 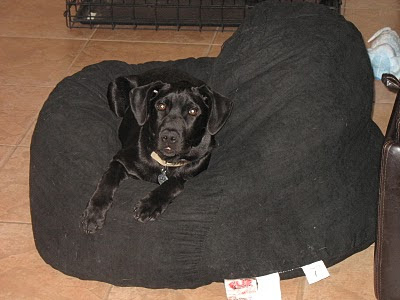 is going to his grandma's

for a morning playdate
Posted by Jenn at 7:00 PM No comments:

So I feel like everything I have blogged lately seems to be negative. A spiralling tornado to a sad ending and that is not how I want to be perceived. How do you pull yourself out of something that feels like you are hanging on the edge of a cliff and no one is there to pull you up? Your feet just dangling.... oy vey!

Then, I remembered one of Angie's post from her blog:

today what mattered most was.... she talked about staying home, loving on her kids, a conversation with her adorable man, sonic ice... and I realized, even though some things make my day NOT as happy as I would like, there are still many things that do make my day good...


So, today what mattered most to me...

~I have a job, a job that gives me some flexibility and helps to pay my mortgage
~spending time and cuddling with Lynkin
~I have lost over 5 lbs in the last week and a half
~plans to go back to DC and spend time with Erika
~my hair is dark {again and forever}
~THIS message from a "student" I enrolled into school "Jennifer I would have never been able to survive these last four years without you. You have helped me achieve something I never thought possible. Be happy!!" She has since become a friend, one I have not met yet, but one I will always cherish.
~Finally, I am able to see my mistakes and learn from them...

So God, I've been asking you to help me through each day and you have. When all is said and done, you are what has mattered most.

Tomorrow will be another day, something else to look forward to!

1st day at the dogpark 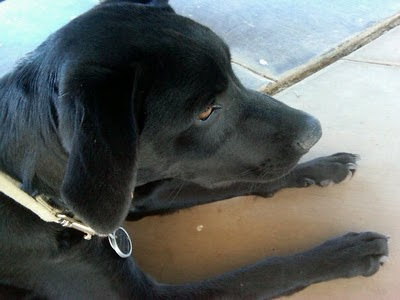 Lynkin just stood around, walked up to other people to get some affection, and finally wandered off because there was a ball or two being thrown around! My favorite was looking over at a boy who had his arms wrapped around Lynkin. He was giving him a hug and a kiss. I heart this dog!

Lynkin graduated from obedience school...
He's such a chill dog that we really do not have any problems. There are a few little things we can work on but for the most part, he's seriously an amazing dog! I'm not sure how I got so lucky but God must have known I would need such a great little guy in my life. He doesn't chew my house up. He's not hyper and does not jump all over the place. He barely barks. He loves to cuddle. When I leave for a couple hours, I put him in his crate. When I come home, he usually stays in the crate and just looks at me. My favorite thing about him so far, is when he is so excited and does a little jump while he is running. I couldn't love him more! 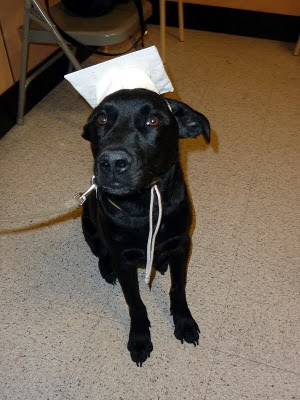 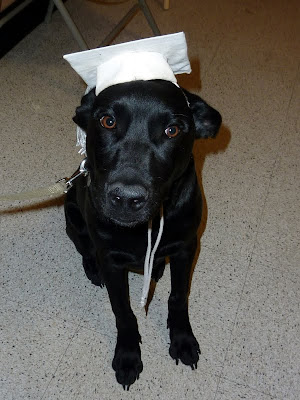 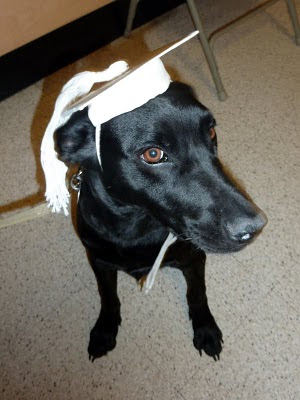 The last few months have brought good and bad. How does it seem that the 1 bad out weighs all the good? And why doesn't the good make me happier? Because when your heart fills broken, not much can heal it... just time.
So here are the things that I am thankful for:
1) My dad is on a waiting list for a liver transplant {he's also doing better with acupuncture, massage therapy, and herbal medicines}
2) I have the best puppy in the world! He's totally chill, has not damaged my house, and he makes my heart smile on my sad days.
3) Friendships that I have thought were lost have returned. First Heather, then Erika, and finally Angie, (we found each other again through FB). Each of these women have been through various situations in my life and now, as I am nearing 40, my heart is yet broken again, and I could possibly be entering a mid-life crisis, are each back in my life. It makes me think back to the email that goes around about friends in your life for a reason, a season, and a lifetime (something like that). Getting together again is like there was never any time lost or any issues between us. I am very thankful for each of them. I'm thankful for all of my friends {and that means YOU!}.

I am thankful for my mothers unconditional love and her health, my house, surviving my MBA and continuing my education. I am blessed with a job and even though there are days I am just burnt out, I do enjoy it along with the people I work with. 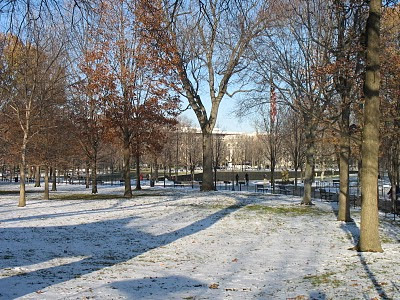 The Vietnam Veterans Memorial....
My entire life, I was intrigued by the Vietnam War. I have come to realize it was what tied me to my father. My dad was in the 5th Force Recon {Marine Corps} and was in Vietnam from 1968-1969. The stories he has told me throughout my life and him not living in Arizona made my obsession with this war, Post Traumatic Stress Disorder, and Agent Orange. For as long as I can remember, I wanted to go to Washington, D.C. to see The Wall. This first photo was my first view of the Wall. I cannot even explain my emotions. By the time I found the Wall, I had already seen the Washington Memorial, WWII Memorial, Reflecting Pool, the White House, and had been lost through the streets of D.C. for about 4 hours. But this, this memorial is why I started my adventure that day... to see the Wall, by myself, and feel the emotions I knew I would have. I envisioned seeing flags, letters, teddy bears, letters, but nothing was left next to the wall that day; however, wedged between two panels was this braclet "Bring them Home Now". 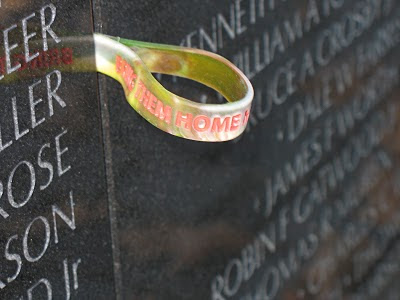 The reflection of the Wall is amazingly beautiful... but the amount of names listed is unbelievable. In my research, I found "The latest names added in 2010, brought the number of names on the black granite Wall to 58,267" and "the Memorial is dedicated to the 2.7 million men and women in the U.S. military who served in the designated war zone". 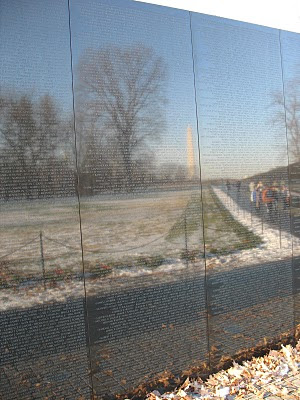 As I walked down past each panel, it was a bittersweet feeling. A feeling of being thankful to these men and woman for the sacrafices they made for us. A feeling of saddness that children grew up without their fathers/mothers because their names were now on this wall because of their sacrafice. Anger for this war taking something from the young soldiers who fought, for those who live still today and are still suffering from this war that ended 35 years ago. Anger at how the soldiers who did come home were treated. It makes me sick to think that people spit on them, looked down on them, that our own government did not accept that there were issues these men and women came home with. When my dad came home from Vietnam, he filled sandbags and put them around his mom's house to protect his family from the enemy. He was 21 years old when he came home. When I was younger, it seemed like he was "such a man" for going off to war but as I grow older, I realize, he was just a kid. 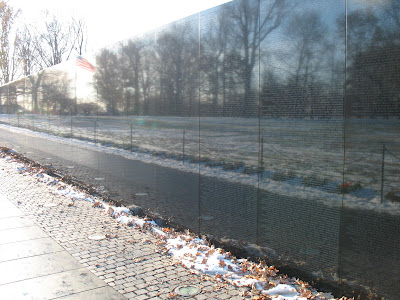 My father, after 40 years, still suffers from PTSD and has medical conditions that have come from the war (medicial conditions due to Agent Orange). Even though I am very blessed, and my father survived the war, after all these years, the war is killing him. That makes me angry! We think that when the soldiers come home, we are lucky. They are alive and hopefully, there will not be medical conditions later due to chemicals but because of the chemicals our government sprayed on the foilage in Vietnam during this war, my father is dying. He's not alone either. 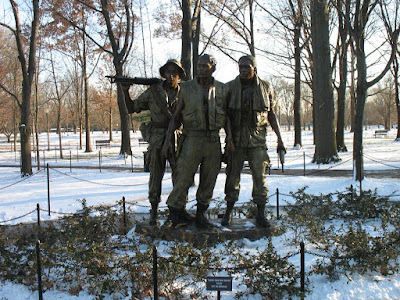 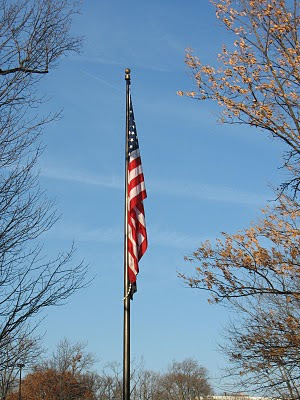 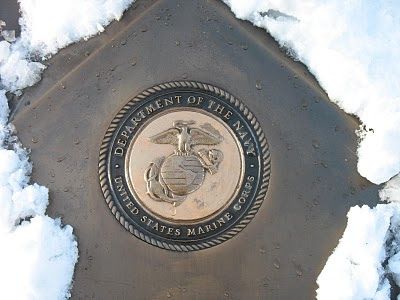 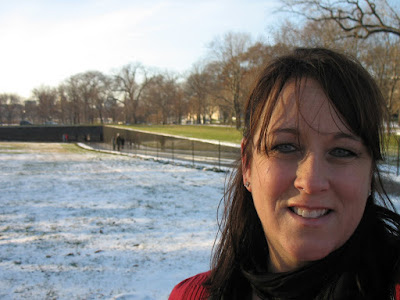 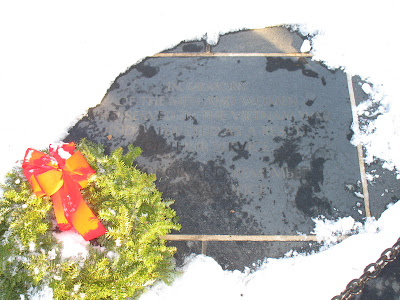 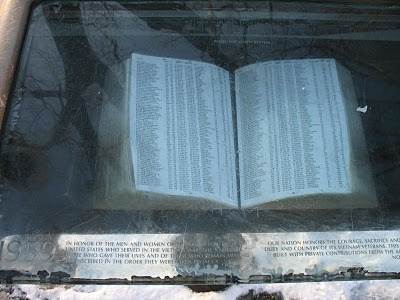 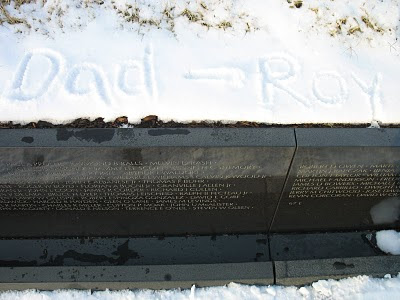 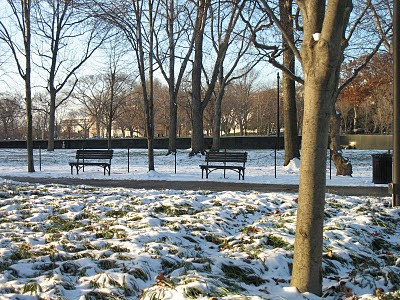 "If you are able, save for them a place inside of you and save one backward glance when you are leaving for the places they can no longer go.
Be not ashamed to say you loved them, though you may or may not have always. Take what they have taught you with their dying and keep it with your own.
And in that time when men decide and feel safe to call the war insane, take one moment to embrace those gentle heroes you left behind."
~Major Michael Davis O'Donnell1 January 1970Dak To, VietnamListed as KIA February 7, 1978